After the trials of getting to Indianapolis it was nice to actually sit down with some great people and actually do some roleplaying.

I'd made a few very minor adjustments to the system between Origins and Gencon and, thanks to the people that played it at origins, a few improvements to the game itself.

The first game of Friday (and apologies again to those that missed out on Thursday) was at 10. After some unpleasantness with inappropriate touching of Anne and Shelly's dice we got underway. Thanks to Pat (not shown below) for her patience and grace. I've not had experience witha visually impaired gamer before and was completely unprepared. Thanks too to Jason who did all the heavy lifting with reading the skills and dice for Pat and played a mean Reginald while he was at it.

It was nice to have Robert along too: a hardcore board-gamer who thought he'd give us roleplaying simpletons with our cute dice and colourful picture books a try. 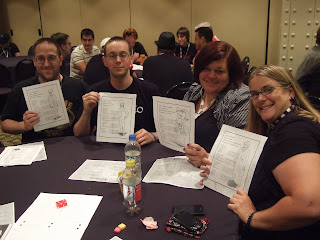 The second game of the day went well too. Watkins was in fine form which Patty seemed to enjoy. The John's were earnest but very effective Isambard and Dave driving the group along while James and Matt bludgeoned and threatened anyone that got in the way. Nicely done; the Doctor didn't stand a chance. 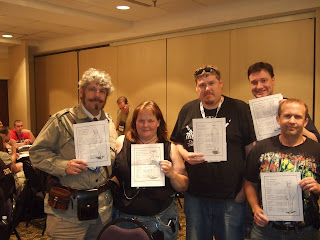 
I was a bit worried about attendance for Saturday morning's game. There was a rumour going around that a gamer had snuck a couple of wine coolers out of their parents basement and brought them to the con.

Turns out my fears were confirmed and three of the six players signed up didn't show. Never-the-less, Keeley, Karen and Sean were all big enough personalities to count for two characters each.

Sean's Reginald proceeded to try drinking the imaginary world dry which must have fortified him somewhat as Keeley's Harold and Karen's Katherine, became progressively more horrified as events unfolded.

I'm not sure if these are smiles of joy or of madness... 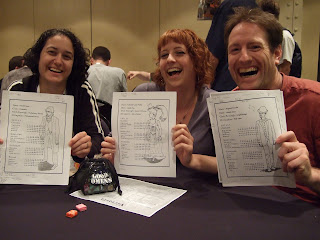 
Unfortunately there was only one person signed up for my second game on Saturday and Geoffrey was sad... 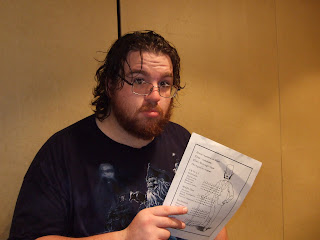 The last game of the con (for me) was a full house plus Geoffrey from the previous cancelled game. With all the characters taken there was someone finally playing Burt AKA Hannibal. I'm not really sure why he the least favourite character but with the two conventions this year combined this was only the second time he was selected.

In any case, with a full house and no ladies in the game it was a rowdy affair but great fun. Doug's Burt was fabulous and Martin's hilariously inept Harold was a real treat. Geoffrey, Ron and Scott's Isambard, Reginald and Saul kicked some ass and tore a few heads off. All the while Bruce's Dave ran around putting out fires while Paul's Katherine made London unsafe for anything not nailed down. 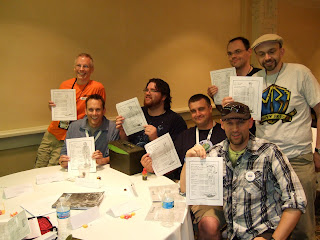 After the last game I went for a stroll along the street from the convention centre in search of something to eat. Most of the places were full and I was about to give up and head back to the hotel but I happened to go back past the noodle bowl when there was almost no line.

Apart from getting some excellent pad thai I also had the good fortune to catch up with Karen and Sean from earlier on in the day when they graciously invited me to eat dinner with them. It was a good to meet a whole group of people including CJ and Kevin from The Walking Eye Podcast Paul and Jeff and a charming lady whose name I confess I do not recall.

It was the perfect end to my 2011 Gencon convention.

So far it's been frustrating and I'm not even there yet! As I type this I am bathed in a sheen of sweat after running (with a suitcase under my arm) the length of Toronto airport only to still miss my flight by a couple of minutes.

I'm not pleased, not just for myself, more for those who have missed out on Thursday gaming because all the other games are full by now.

With this in mind you hopefully found this note at the venue.


Heartfelt apologies I am not there. I know time is precious at Gencon and with this late cancellation you're probably going to miss out on gaming altogether for this time slot. I'm very sorry for that and as disappointed but probably sweatier than you.

Despite it being faster to fly long distances in theory, sometimes it doesn't work out that way and a "maintenance problem" caused me to miss my connection to be there today.

On Saturday at two there are still spaces available for this game so in the unlikely event you're not booked for that time I'd love to see you there. If not drop me a line at victoriarpg.com and give me hell for wasting your time. I'll make it worth your while.

This on top of a flight cancellation that made me cancel Sunday's game has made for a pretty poor run-up to something I had been looking forward to for some time.

The flight I was taking next to Chicago was also delayed which caused me to miss the Indianapolis flight. Fortunately that could be rebooked and I finally touched down in Indianapolis at 12 am.

Phew. Off to the hotel... which had had a flood making 8 rooms uninhabitable and was fully booked.

Being the last to arrive at the hotel meant I had to transfer to another hotel which was unfortunately 30 minutes away and I had to return to my original hotel first thing in the morning to catch the shuttle I'd booked for Gencon.
Posted by hzdgmg at 12:13 PM 1 comment: